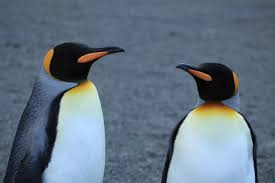 The name penguin refers to a group of flightless birds that live almost completely in the Southern Hemisphere. Since penguins are flightless, they cannot fly.

If penguins don't fly, how do they move?

Instead of flying, penguins use their flippers to swim. They are skilled swimmers and spend more than half their life swimming. Their wings are made of special feathers that help the penguin move quickly underwater. Penguins swim extremely fast, a skill they use to escape predators like seals.

On land, penguins stand upright and use their tiny legs to waddle around! They may also slide around on their stomachs. Sliding around on the ice helps penguins move quickly on land since they can't waddle too quickly.

Where do penguins live?

They live in many regions of the world, some that are cold and some that aren't. Many penguins live in Antarctica, while some live as far north as Australia.

In colder regions, they live on icebergs in large groups called colonies. These colonies help give the penguins protection from predators that could hurt them or try to eat them.

How long do penguins live?

The lifespan of these birds varies from subspecies to subspecies but, in the wild, penguins can live for 15-20 years.

How do penguins stay warm?

Penguins have a thin layer of fat that helps them stay warm. They also have special feathers which trap warm air close to their bodies to keep them warm and to keep cold air away.

What do penguins eat?

These birds catch their prey by swimming the and catching the animals in their beaks or picking them out from the side of the water.

Why are many penguins black and white?

Scientists aren't entirely sure why penguins are black and white, but there are a few theories. One of the theories is that the coloration helps them blend in on ice and blend in away from predators.

Penguins, like all other birds, lay eggs. Unlike other families of birds, however, male and female penguins take turns incubating the egg. The dad will incubate the egg while the mother gets food, and then the dad goes to get food.

Are there different types of penguins?

While we often think of penguins as only being black and white, not all penguins look like this. There are many different types of penguins, like the:

Are penguins endangered species? What does that mean?

Certain types of penguins (like the Yellow-eyed penguin or the Northern Rockhopper penguin) are endangered species. This is mainly due to hunting and climate change. As the temperatures outside get warmer, the icebergs on which these penguins live melt. With no icebergs, the penguins have nowhere to go.

Luckily because of conservation efforts (the practice of protecting wildlife), many subspecies that were previously endangered are in safe numbers.