Municipalities – communities that have been officially recognized by state government charter as having local forms of government that provide services to their residents. (565 in NJ)

(most popular in NJ)

4) ordinance – local law passed by a county or local government

5) at-large election/member – an election for an area as a whole, such as a whole municipality or state

6) special district – a unit of government that deals with a specific function, such as education, water supply, or

7) metropolitan area – a large city with its surrounding suburbs

8) suburbs – communities that are near or surround a larger city, consisting of smaller municipalities.

9) wards – several adjoining precincts making up a larger election unit, such as a city or town

Each of these municipalities has one of the following structures:  a “strong mayor” plan, a “weak mayor” plan, a “council-manager” plan, or a “commission plan.”  Towns, cities (sometimes), boroughs, and townships can use a hired “administrator/manager” now, since local government leaders (except for cities) are part-time, though they may receive a yearly “stipend” or “thank you” money.

The Council-Manager and Commission Forms 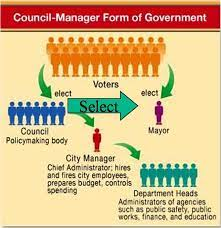 (Today, only about 30 of New Jersey’s 565 municipalities are commissions, including six in North Jersey. They are North Bergen, Union City and West New York in Hudson County, Lyndhurst and Ridgefield Park in Bergen County, and Nutley in Essex County.) 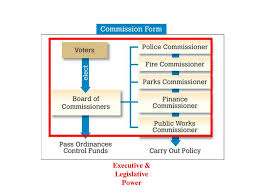 RP has these departments:

D.   Other Units of Government